We’re still catching up on the calls from folks over the winter with cats who needed our trap/neuter/return (TNR) services, so we’ve been working our tails off lately. There are those in the TNR world who think you should spay and neuter free-roaming cats even in the dead of winter, and I understand and respect that perspective, but our group doesn’t share it. Those who believe in winter TNR do so because females start getting pregnant (in our area) around February or so, so if you spay them in the winter there won’t be kittens. A good thing, granted. But we just can’t find it in our hearts to put a female cat whose belly has been shaved back out in single degree temperatures three days after surgery. We know it is done all the time, but our group chooses not to do it.

And so, we keep a list of cats that need to be “done” and we play catch up when the weather turns less ferocious. We have a nice new group hanging out waiting to go to their surgeries on Saturday. It has been a frustrating week in one way. We’ve caught a lot of cats whose ears are already tipped. While that’s a little annoying, it’s also a sign that our program is working! Last year about 20% of the cats we caught were already ear-tipped. This year we’re running at 50% or more. (Ear tipping, for those who don’t know, is taking a small slice off the top of the left ear during surgery, and is a universal sign that a cat has been neutered.) We’ve also caught a large number of racoons and skunks this week, which is a sign of absolutely nothing except that the food in the traps looks good to wildlife.

This week’s crop of cats is an unusually sweet one. Callie, a very nice tortie, may actually go inside when this is over. No guarantees, but her caretaker is considering adding Callie to her crew of three indoor cats.

Bringing an adult free-roaming in isn’t always the right choice, but it might be for this sweet girl. 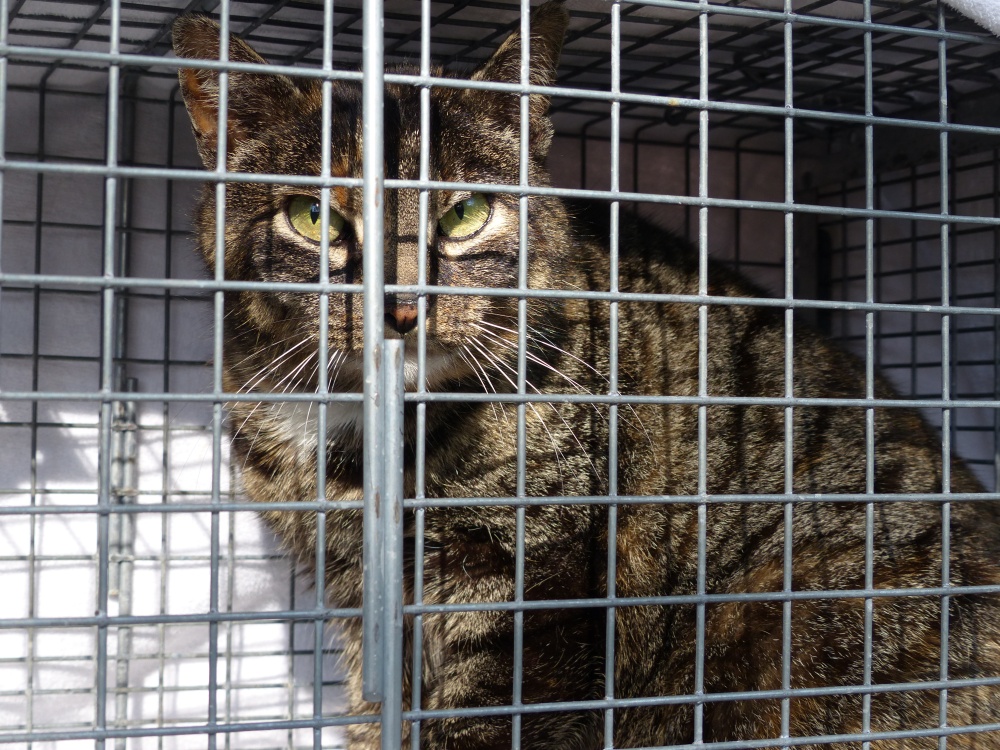 One of the boys that came in last night seems to suffer from claustrophobia, and he was so stressed overnight in that trap that he’s now missing some skin on his forehead. 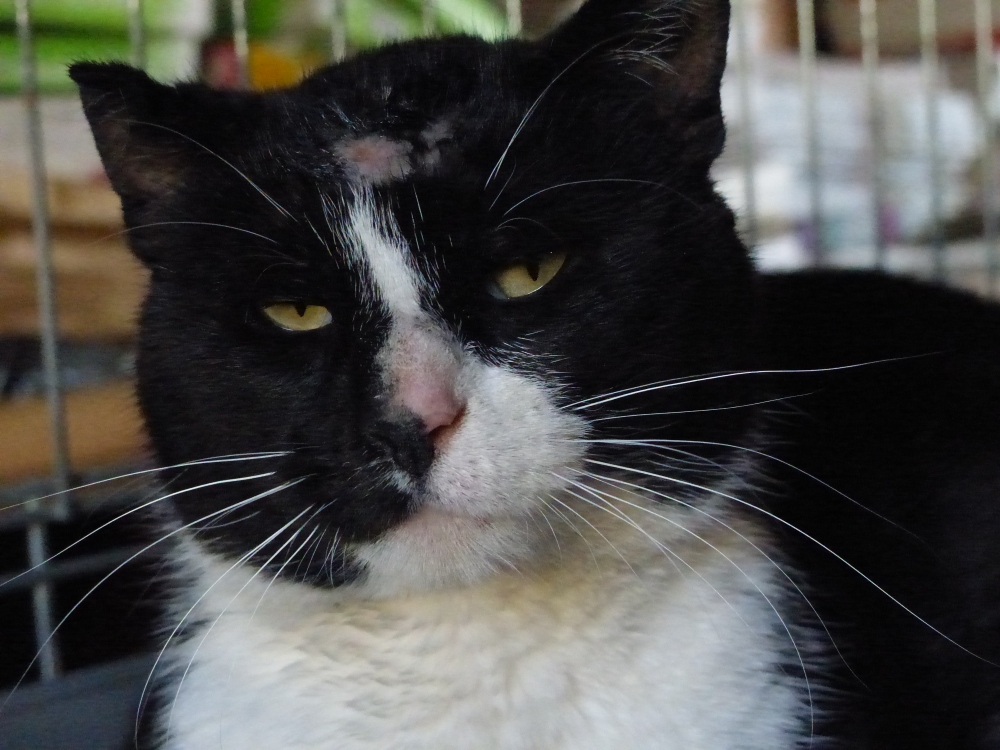 That doesn’t happen very often. Most cats get pretty quiet in the traps, but this guy just can’t manage trap life, so I moved him into a big dog crate today, and he calmed down right away. He’s actually a really sweet guy, and was probably someone’s cat once. He was rubbing against my arm and tried to cuddle with me while I was doing his room service. He left me clean the open skin on his forehead and apply antibiotic ointment with no problem, and it is good to see him feeling more relaxed.

For some in the TNR world, it is mostly a numbers game. Get as many cats as possible, especially females, and those numbers certainly matter.  We’re as happy as the next group to see the number of kittens born each year go down, and to see the free-roamers living as well as possible. Many live better than their indoor counter-parts, depending on their caretaker.

But for us, it is also about hospitality for the cats. Making them as comfortable as we can while they are with us. Insuring that any medical needs they have get treated. One of our current guests has a pretty nasty-looking eye wound. I don’t think it is recent, but we’ll have the vet look at it anyway. She’ll let us know if we need to do anything to help. Everyone gets fed as much food and water as they want, and their “rooms” are cleaned twice daily. They get flea and ear mite treatment while they’re under, as well as deworming, and all their vaccinations. We want to send them home in tip-top shape. And if they are too sick to be outside anymore, we will either place them in a local cat sanctuary to live out their days, or occasionally we have been with a cat who needed to be released from suffering. Euthanasia may not seem like hospitality, but I can tell you that there are times when it is the most hospitable and caring act we can offer.

It has been a very long week, and we are definitely tired. Long nights, and early mornings, and a zillion phone calls and texts all day and evening from trappers and volunteers and what not…we are ready to let the medical and recovery team do their thing come Saturday and take a little break. We’ll breathe for a day or so, return this crew, and then clean the traps and the towels and the tables and the dishes, and start all over again. It’s a grind at times, but it is a good and satisfying one, and when winter comes we look forward to a nice break. 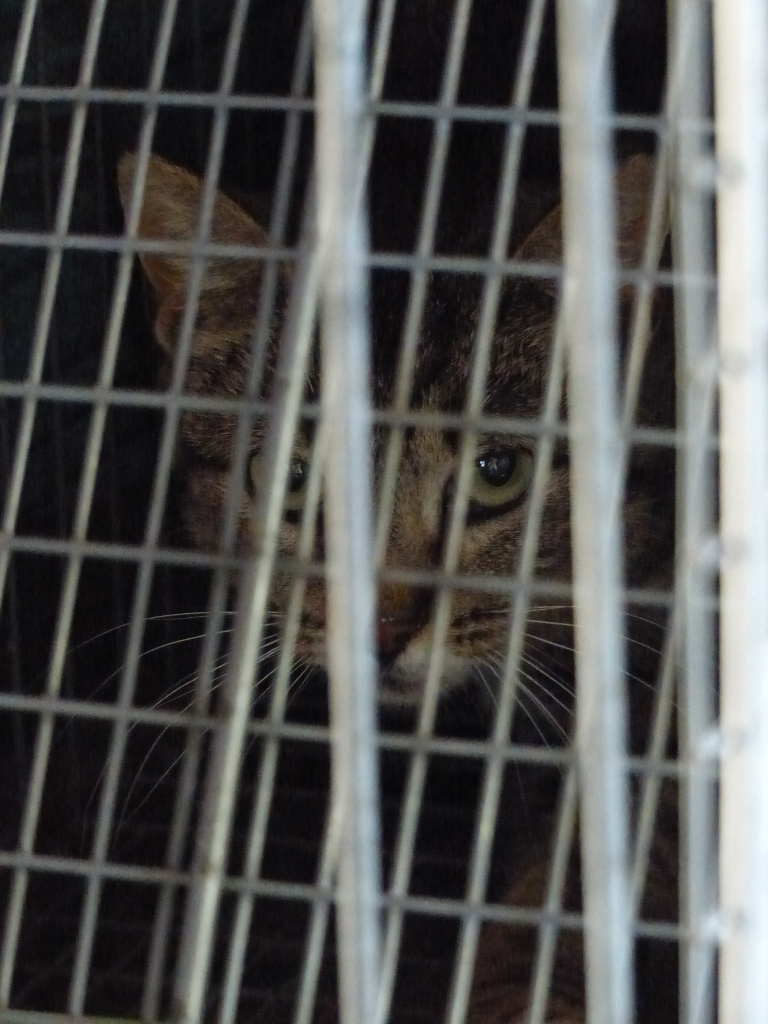